Since the start of my third year of my Computer Science degree I have not really done much C or C++ programming. My primary programming language at the moment is Java and on the side I am doing some C# work. C++ was the very first programming language that I learnt by myself and during my bachelor’s degree it was the first language along with C that I was taught. There is some stuff that I really like and there is some stuff *cough* pointers *cough* that really annoy me.

With a fairly new laptop (my Surface Book 2), I thought it might be worthwhile to get back into some C and C++ programming. Java and C# are great programming languages but sometimes it is good to go back to your roots and program in a language that is significantly more low level. The attention to detail and level of understanding is significantly higher in C and C++, than Java and C#. If I ever start to feel lazy while programming in Java or C# I think back to how difficult it was to implement some things in C or C++.

I have Visual Studio 2017 installed on my Surface Book 2, but what I really want to do in C and C++ does not require the overhead for the projects that come with using Visual Studio. So instead I am going to use Cygwin (gcc and g++) instead. If you want to use Visual Studio then that is fine but to help others I am going to go into detail about setting up Cygwin so that you can run the gcc and g++ commands to compile and build your C and C++ programs.

Just like on the Cygwin web page “Get that Linux feeling – on Windows“, installing, configuring and using Cygwin is super easy. You can download the 32 or b4 bit versions of Cygwin at the following location. I am going to go over the installation and customization so that you can easily compile and build your C and C++ applications.

Note: When you are presented with the following screen on the installation wizard, ignore selecting any package and just press the “Next >“ button. We will be using command prompt to get the necessary gcc and g++ packages. 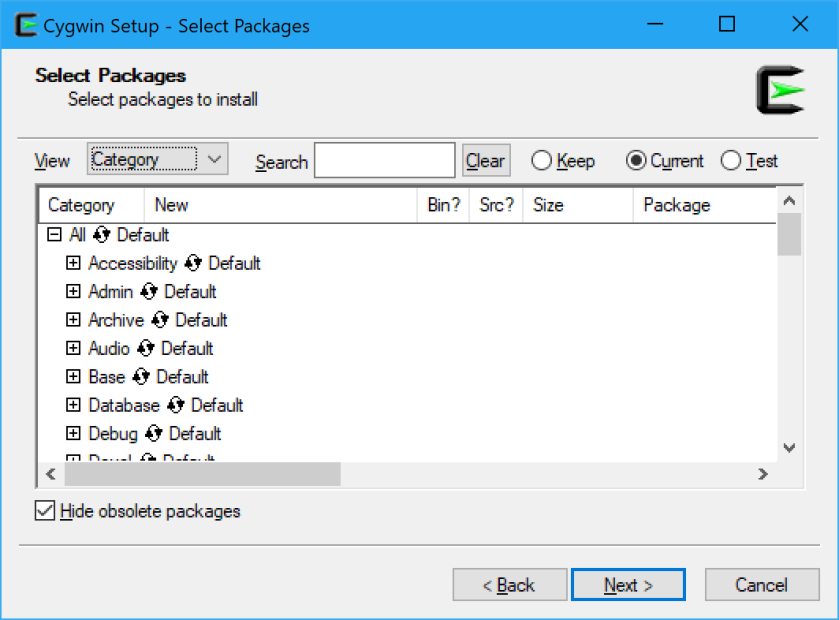 Continue with the installation wizard and let the dependency download commence. Depending on your download speeds it may take some time to download all the necessary dependencies.

Now one of the very most important components for getting a compiler working outside of using an IDE like Visual Studio is making sure that you have the necessary packages. Open Command Prompt and enter the following in the command line:

Note: The location of the executable was placed in my Download folder and the command was executed from that directory after I navigated to it.

After you have executed the command, the Cygwin setup should relaunch and it should proceed with the download and installation of the packages that were listed in the command line.

The compiler is installed and you can verify this by launching the Cygwin Terminal and entering in the command:

You should see the following displayed on the terminal. The versions of the compilers may be different depending when you install Cygwin and/or if you manually update to an even later version of the compiler (this has not been done here).

To test the compiler out (I’ll be testing the C++ compiler here) we can create a very simple C++ application and use the g++ compiler. The very first C++ program that I ever wrote was a simple Hello World program. What better way to test the installation of the g++ compiler than to use that simple C++ program. Below is the sample code in case you want to start learning C++ and/or you just want to quickly test your compiler but not actually write any code yourself.

Save the above code as HelloWorld.cpp or use your own piece of C++ code and place it in the location of your Cygwin home user directory. By default it should be under C drive, ie. C:\cygwin64\home\<username>.

To compile the C++ code all you need to do is run the following command in the Cygwin Terminal:

What this will do is create an executable that is called “HelloWorld.exe” that you can then run from either the terminal or straight from the Windows Explorer. If you run the above piece of code in the Cygwin Terminal then the output should match exactly what is shown below; note that the program is waiting on user input before it terminates.

There you go. You now have a Linux like C and C++ compiler installed on Windows and you do not need to have an IDE to compile and build your C or C++ projects. Hopefully this little guide and my desire to go back to C/C++ has fueled your own fire. Enjoy!