Just to give everyone some background information about why I decided to help create this game. At Itree, there is great emphasis on innovative solution design and allowing individuals to express their inner creativity through various means during our lives. At a company wide hackathon named ‘ShipIT’, a fellow college proposed that we create a version of Chess that involved three players.

Sure there was probably a version of three player Chess out there already (there definitely are), but we wanted to create our own version for a challenge and change of pace from our daily work. As a fan of Chess and trying out new and challenging experiences I jumped on board straight away. So as a team of four we set out to create a version of three player Chess. To make things even more interesting and stressful, we only had 12 hours to complete this project and also prepare a small presentation that we will be giving to the rest of the company the next day.

Could not get any simpler and basic. All we used was Java and the Java Swing framework.

To make things even more interesting, the game board is presented in such a way that your pieces move in a non-traditional fashion, especially when they reach the intersection of the opponent board segments. There is no traditional ‘forward’ movement of the pieces like in standard Chess. Once you reach the centre of the board or the connecting segment of the other player’s colour the direction the piece can move changes dramatically. 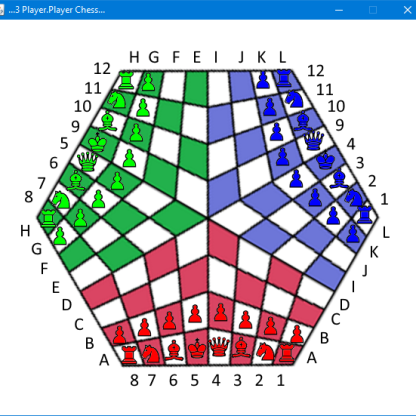 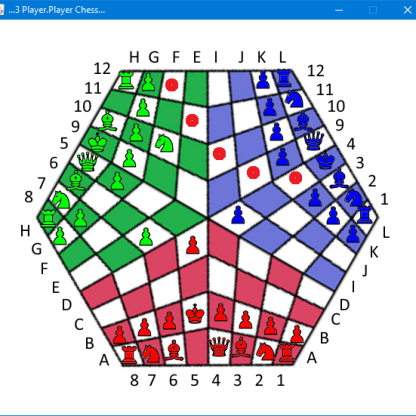 The second image (right) shows a game in progress with the player who has selected the blue pieces ready to move the Bishop on square L3. The red circles on the board indicates the possible places the blue Bishop may move to.

Capturing enemy pieces is the same as traditional Chess, all the pieces move identically i.e. Kings can only move 1 square in any direction, as is the process of converting a Pawn to a Queen once it reaches one of your opponents starting board edges (the numbered edge).

After an intense 12 hours of designing, coding, testing and preparation for the presentation, what we accomplished as a team was great. Were there some elements that we wanted to include such as a scoreboard and network connectivity to allow for remote play? Absolutely. But when it was all set and done I was proud of what we created. Potentially in the future we may be able to improve on the game and implement these features. Consider the current build a pre-release alpha version of the game.

Not only did we create a fun game to play, but others while we were creating the game would stop by our workstations, and ask if they could try it out. Once people we doing that, we knew that we had created something that people would be interested in playing. At the end of the day though, it might have been a good thing that we did not include network connectivity as the game could have ended up being a major distraction to the employees during the standard work day 😉

If you would like extra information that feel free to send me an email and I will try my best to provide you with answers to your questions.